Many of us have enjoyed the beauty of the Gulf Coast of Florida. As you know, Eastern Panama City, Mexico Beach and Southwest Georgia took the brunt of Hurricane Michael’s wrath. We look at the shattered shore line and realize that many, many lives have been impacted by the devastation in front of us.

We care, but often the suffering is faceless and impersonal unless you know someone or you have direct contact with someone displaced or impacted by the storm. Many of those who have most of their homes in tact are without power. Being without power is an inconvenience for most, but those who depend upon it to run an oxygen concentrator, ventilator or suction machine may find themselves in dire straits. Even if they evacuate, who will supply missing equipment, tanks and service? 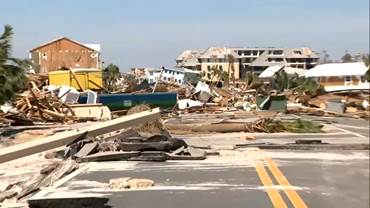 This was just a hypothetical question until an older couple who evacuated from the stricken area walked into our Medical Retail space. The wife is an oxygen patient. Neither of them were able to get her oxygen concentrator out of their damaged home. They found themselves more than 450 miles from home and depending upon the remaining tanks that she had on hand to provide oxygen. They had the name of a local provider who will care for them, but had no idea where they were. She was very anxious as to whether she would have enough oxygen on hand. Maribel was working in Retail and did an excellent job calmly setting about to help them. Though we no longer carry oxygen, a check on the liter flow and number of full tanks they had on hand showed that she had potentially more than enough oxygen.

Maribel was able to find the recommended provider- which incidentally is owned by the same parent company as her service in Florida- less than a mile away! Though we were not able to provide on-going oxygen service we did give them hope, a hug, and prayer for their safety, security and recovery. They were appreciative and we were able to direct them to her local oxygen provider who already had all of her necessary documentation to continue service in our area.

Have you considered that what you do here is being used by God to bless others? Though this precious couple found themselves displaced by Michael, they were blessed by TwelveStone. Thanks Maribel and Cannon. Please pray for these and so many more who otherwise might just remain a statistic on the news. If you know someone who has experienced a serious loss because of Hurricane Michael, please send their names to me so that we can pray for them. Also, you may wish to consider donating to a relief organization like:

If I can pray with you or be of any service, please feel free to stop by my desk or contact me anytime.